Today we’ll look at a fairly common server-side scenario. In this case, a server installs clients on remote machines and clients report back through a socket.

We want to create a “hold-timer” – each client will periodically send a heartbeat with a unique id back to the server to indicate they are alive. If the server doesn’t receive a heartbeat from a client within a specified limit then the client is removed.

Here’s a simple snippet that demonstrates how you can do this with reactive extensions. If you want to run it, paste the code into a console app – and don’t forget to add Nuget package Rx-Main :

Let’s gloss over the Synchronize() call for now – I’ll come back to this later.

The first thing we want to do is separate out each client’s events into seperate streams for independent consideration. We can use Observable.GroupBy to do this. GroupBy needs a key selector which will identify each group. In this case we can use the identity function (key => key) and group by the id itself.

So now we have individual streams for each client id to work with. Let’s consider the goal – we want to emit a signal whenever a client doesn’t notify us for a specified duration.

Observable.Throttle is what we need. This extension method will suppress an event if another event appears within a specified duration. Perfect! We apply a Throttle to each group and we will only get an event if a client doesn’t say hello in time.

The situation so far is illustrated below: 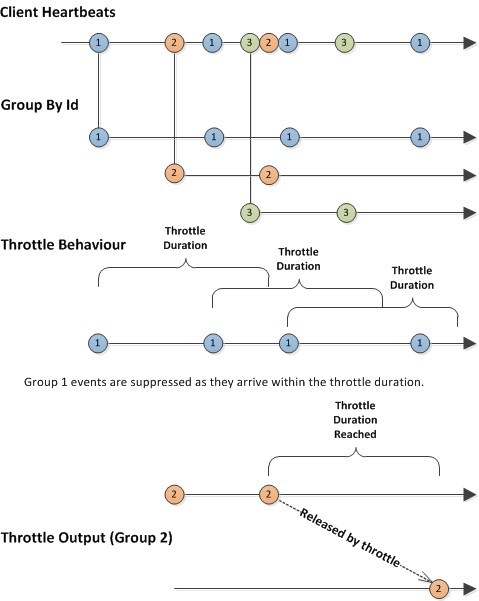 Now we need to pull all the separate streams back into one result stream. For this, we can use Observable.SelectMany. One of its many (no pun intended!) overloads will do this for us, accepting a stream of streams and using a function pull out elements to be sent to the result stream. The selector function takes each group stream and we can apply the Throttle behaviour described above.

Now, there’s a problem here. The GroupBy operator has a memory leak! As written, it’s groups will never terminate. Even worse, if you try to terminate a group subscription (with say a Take(1) after our throttle), then the group will end, but won’t ever restart! I wouldn’t get too carried away worrying about this unless you have very large numbers of clients and never restart your service but…

You can address this problem by using Observable.GroupByUntil which takes a duration function for each group, and allows groups to restart. Here’s the code – I’ll leave it as an exercise for you to figure out the detail of how it works and why I’ve written it this way.

One final note… about that Observable.Synchronize. This function ensures that the IObservable<T> it is applied to behaves itself! It enforces the Rx grammar of OnNext*(OnComplete|OnError)? and it makes OnNext calls thread safe. In Rx 2.x, although Subject enforces correct grammar, OnNext calls are not thread safe. This was a decision made for performance reasons. It’s quite possible that in production server code you will be wanting to call OnNext from different threads. Synchronize will help prevent any nasty race conditions by putting a gate around OnNext calls.